This week on The Bachelor, we pick up with Pilot Pete right where we all feel at home – the drama. We finally (literally, 4 hours later) finish the events of the first episode, and are in a time warp where it is episode two but week three in the mansion. Love that for us – expect cliffhanger episodes.

**WARNING: SEASON SPOILERS AHEAD. The following recap contains references to SEASON SPOILERS of The Bachelor 24. Articles on the site are unspoiled unless indicated. STOP READING If you do not read Reality Steve and want to avoid season spoilers.**

Well, here we are, held hostage through the second episode of this season’s The Bachelor that is centered on the saga of Peter and Hannah that took place in September. It’s January. We digress.

“Boyfriends are temporary, cashmere is forever.” – our icon, Carson Kressley.

We pick up this week with the conclusion of Peter and Hannah’s dramatic The Bachelor tale. First question – how did Hannah mysteriously appear back on the couch? Versus her original corner of the room, otherwise known as Siberia.

The editing here is weird – clearly they get some sort of closure before they part ways and he continues the show but we’re not shown any sort of closure. What do we want? Clarity. What do we get? Spliced frankenbite editing. We’re unconvinced this conversation even transpired in the way we were shown. Friendly reminder of our preview of this conversation in the initial promo. It appears that there is indeed unfinished business between these two. Admittedly, it was a weird flex that, “can I give you a hug?” transpired into Hannah climbing into his lap like a baby orangutan. All dissection of this bizarre scene aside, we must reiterate that this conversation took place in September, nearly two months after After the Final Rose.

Peter cancels the rest of the date and says he’ll see the women during the evening portion of the date. The women are, understandably, upset. Natasha says she’s seen Hannah every time she’s seen Peter – this is true, but you’ve also only known him for like three days so let’s calm down. We, too, would like to exit this ride, but here we are. Hannah spared y’all from this god awful date. Consider yourselves #blessed.

Peter: I don’t think today we can continue with this group date
The women on the group date:#TheBachelor pic.twitter.com/P4Tv3wT9Fn

At the cocktail party, Peter is the star of his own Comedy Central Roast minus the comedy. Peter, did you not get the memo? You’re actually auditioning to be the Bachelor for this group of women until this apology tour is over. Peter is actually very forthcoming and transparent and the girls seem placated by his ability to take ownership – Luke P., if you’re still reading…

Alas, we’re back to being over it when he does his signature lift-onto-counter move with Mykenna. We know he’s ‘windmill guy’ but we just can’t see Peter as a sexual being, sorry, Buddy. You’re just a badass hunky dude to us.

Gonna tell my kids this is Pilot Pete #TheBachelor pic.twitter.com/rfuGL1yyCs

Well, this cocktail party gets lit.

Me getting emotionally prepared for Champagne Gate #TheBachelor pic.twitter.com/GhTsxdanyH

Peter talks to Lexi, whom he clearly does not remember. The downside of bringing a sweet ride to the mansion? The male species will only remember the vehicle. She reminds him she showed up in the red convertible and he hands her a toy red car that he (production clearly gave him at some point) suddenly and conveniently has for this experience he does not recall!

Peter gives Madi a genuine and real photo of the two of them with his parents from the vow renewal they went to two days ago. This has Ben Higgins/Lauren Bushnell vibes written all over it.

Enter champagne gate. Kelsey has brought a bottle of champagne that she received for her birthday to share with Peter. Now, we understand being possessive of your belongings and, keep in mind, they’re all drunk at all times. However, it is a bottle of alcohol, for perspective, and Kelsey way overreacts to this entire scenario to which Hannah Ann seems completely unaware of. Point, production.

The producers when they heard that champagne pop #TheBachelor pic.twitter.com/02fsamOIeA

To conclude this bizarre tale, Kelsey and Peter open a neutral third-party bottle of champagne. She chooses to drink out of the bottle because she’s “not a classy bitch all the time” and honestly, put it on our tombstone. The champagne quite literally blows up in her face in one of our favorite scenes maybe ever?

Good morning to this gif, and this gif only. #ChampagneGate #thebachelor pic.twitter.com/yq1djnBcc4

The rose ceremony is overall uneventful not for the only screen time for our deity, Sarah Coffin. Hot Lauren and the stepmom from Au Pair are sent home. At least they were spared from going to Cleveland. 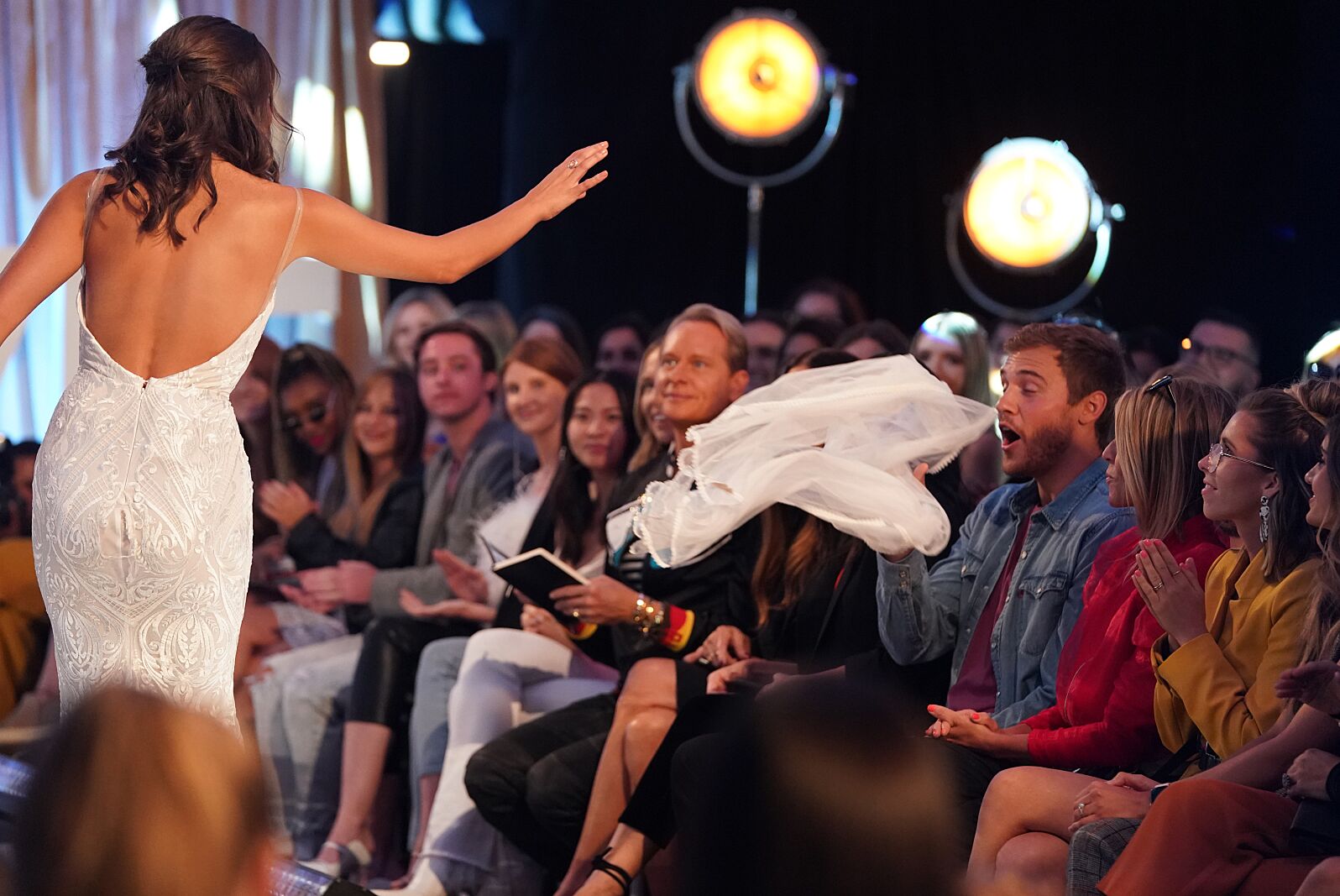 First Robert Mills jokes that they’re setting up a casting booth at Stagecoach, and now the show is giving the girls a head start on their inevitable influencer careers with a Revolve fashion show. Pretty soon #RightReasons will refer to the right sponsorships and the show will (finally) forgo pretending like it’s about marriage.

Must be nerve racking for all these women to be meeting their future boss on a group date in the Revolve Chief Brand Officer. How many of their accounts will say #Revolve #ad in the next few months?

America’s next top model was our gateway reality show drug and we’ll always have Tyra’s judgemental voice telling us to smize in our heads whenever we take a picture. Iconic. Hannah Ann’s casual look is a wedding dress. Our casual lewk is a Juicy tracksuit but, sure, a wedding dress works. Does Revolve sell bridal? Because this is the ugliest wedding dress we’ve ever seen. It is so unflattering on Hannah Ann, who is minuscule and in excellent shape. Who exactly is this dress for? Anyway, whipping out a wedding dress is a classic villain move but the other girls don’t really seem bothered. Peter catches her veil.

Victoria F spends most of the date crying about how insecure she is but then comes out for her formal look in a trench coat which she takes off to reveal… lingerie. She’s definitely steal-your-husband level hot, damn. She kisses Peter in front of everyone. Seems like someone finally felt comfortable in her own skin?

The judges chose two girls to walk a final time. At this point, you’ve probably guessed that the girls will exit in matching outfits. You’d be correct. 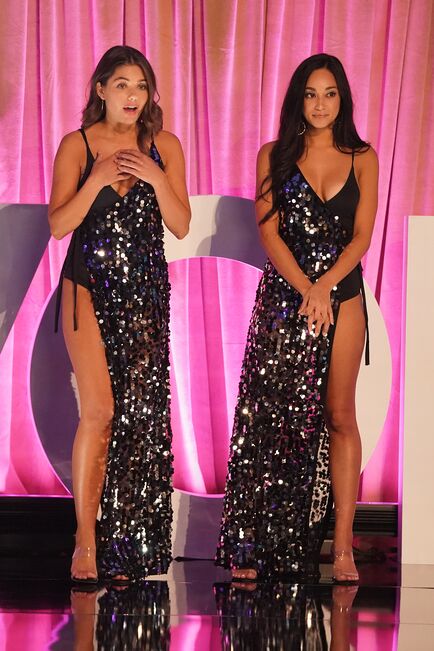 Hannah Ann wins and gets to keep all the clothes (though hopefully not the hideous wedding dress). Honestly, we are always here for dates where the contestants receive fun gifts.

At the cocktail party, Victoria is again insecure with Peter for whatever reason but he is great at reassuring her. Allow us to illustrate the rose ceremony through a series of tweets.

Peter: I know you’re not like any of the girls here.
Narrator: and that was true. She was worse. #TheBachelorABC #thebachelor pic.twitter.com/MYFvCLe3Ch

Kelsey: this is the first night I haven’t cried in two nights!#TheBachelor producers: pic.twitter.com/yCNAIGerfp

Hannah Ann: The past is in the past. I’m going to put yesterday behind me….
#TheBachelor pic.twitter.com/M6n3Jk7mmZ

While we definitely don’t think Kelsey was bullying her, Kelsey immediately starts crying and gets defensive when Peter pulls her aside to ask her about it. Kelsey, sweetie, we have the Bachelorette posters ready, but you have to pull it together. Just say: “I was upset and said some things that I know were hurtful; whatever my issues with Hannah Ann, I would never want to make someone else cry or feel bullied.”

When in doubt, just apologize and move on. Digging your heels in never got anyone anywhere.

Happens to the best of us #TheBachelor pic.twitter.com/TGpmkTTEbi

In the meantime, we’ll be continuing our mourning period of Alexis no longer gracing our screens. You know where to find us next week. Xoxo, bachsleuthers.

Next: The Bachelor: Who went home during season 24, episode 2?

Whose side are you on re: Champagne gate? We’re team intern who shook up Kelsey’s bottle prior to their exchange.